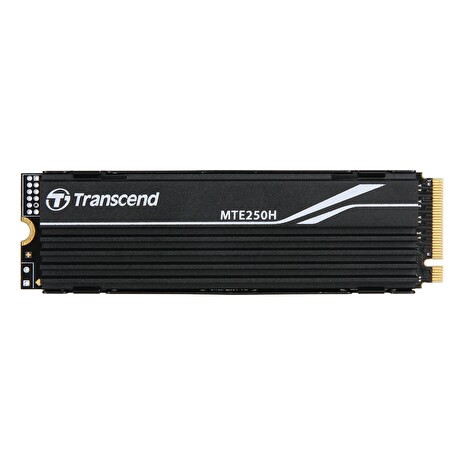 Note: Performance is based on CrystalDiskMark v6.0.2.

Level up with next-gen PCIe 4.0
Transcend's MTE250H features the new PCIe 4.0 specification, supporting a bandwidth of 16 GT/s per lane as opposed to 8 GT/s per lane for PCIe 3.0. Backwards compatible with PCIe 3.0, PCIe 4.0 unleashes higher transfer speeds and guarantees lower system latency. For advanced gamers, this means a more seamless and immersive experience.

Be the coolest
Transcend's MTE250H features a high efficiency aluminum heatsink to improve heat dissipation of the high performance, compact-sized SSD. The high thermal conductivity of aluminum and increased surface area reduce drive temperatures by 15%, allowing the SSD to maintain lower operating temperatures, even when you're maxing out performance on your desktop PC or game console.

Small in size, large in capacity
Featuring the M.2 2280 form factor, Transcend's MTE250H is available in capacities of up to 2TB, giving users plenty of space to store multiple blockbuster games.

SSD Scope software
Transcend's SSD Scope is an advanced, user-friendly software that makes it easy to monitor the condition and optimize the performance of your Transcend SSD, ensuring that it remains healthy and continues to run fast and error-free.

Guaranteed quality
The PCIe SSD MTE250H is covered by a five-year limited warranty. To ensure the utmost level of quality, Transcend SSDs undergo rigorous testing at all stages of production, including tests for vibration, temperature and humidity, speed, and functionality.

Warranty does not apply when SSD Scope's lifetime indicator displays 0% within the warranty coverage.
Removal of heatsink may cause damage to the SSD not covered under Transcend's warranty policy.

Note
Systems for use with the PCIe M.2 SSD must have an M.2 connector with only an M key. B-key connectors are not compatible. Improper insertion may lead to damage. Please click here for more information.